December 04, 2013
"With His Might We Fight!" This is the theme of this year's Catchfire Rally held last December 1 at Philsports Arena (formerly ULTRA). Organized by the biggest Catholic organizations such as Ligaya ng Panginoon, Familia, and Couples for Christ, Catchfire is a major inspirational event that aims to re-ignite the” fire” among Catholics and other Christians by allowing them to receive the fire of God’s love and spread it to others.

I was privileged to attend the said gathering which was divided into two parts: Eucharistic Celebration, and the Rally Proper.

If prayer, fasting, and alms-giving are the Lenten essentials, Archbishop Socrates Villegas discussed in his homily the three things this that we ought to do this Advent season: Listen, Love, Let Go.

Before giving the final blessing, Archbishop Soc also encouraged the community to never cease praying. "Pray for it. If it is good, God will give it to you."

As in any gathering, the rally proper began with a very powerful praise and worship. The crowd united in worship was a sight to behold. 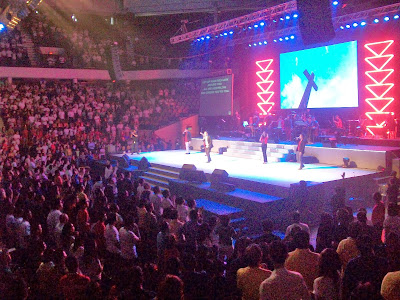 There were three sharers - a couple, and two men, who gave testimony to what it truly means to be fighting with the Lord's might.

"Forgive me Lord for my unforgiveness." This had been Arlene Arcilla's prayer for a long time since she learned about her husband's infidelity. But through the Lord's grace, Manny was renewed, and now their whole family actively serves in their Catholic community.

Don's family was among the many who lost their properties during the flash flood in Cagayan De Oro brought about by Typhoon Sendong back in 2011. His mother is yet to be found until now. While he still hopes to see her alive and well one day, he has also prepared his heart for the worst that could happen. His only consolation is his faith and confidence that God is taking care of his mother wherever she may be.

The third sharer was Atty. Theodore Te. For those who no longer remember him, he was the lawyer of Leo Echegaray, the first Filipino executed by lethal injection after the reinstatement of death penalty in the Philippines in 1993. I don't know him personally but while listening to him, I knew it was God's love that transformed him and molded him into what he is now. His words came from a heart changed, purified, and set to win the battle with Christ. "In my ambition to change the world, the King of the Universe made me see what I needed to change." Now he is living his purpose to "be Christ's light to a world grown dark and a blazing fire to warm hearts grown cold."

One of my favorite parts in the event was when Joseph Erwin Valerio created a beautiful sand art while The Prayer was being played. His piece was about the recent national tragedies which he concluded with this powerful image:


Bobby Quitain took the floor after thanking Joseph the Artist for such masterpiece. He gave a beautiful reflection on the story of David and Goliath (Read 1 Samuel 17).

We may have different "Goliaths" to fight but we have the same "God" who will fight for us.

And he presented four (4) ways to fight with God's might:

1. Choose to ENTER the battle. And fight the battle where you are.

2. Choose to EQUIP. David had smooth stones to conquer Goliath. We also have our five (5) weapons - the old reliable namely: prayer, Scripture, fellowship, service, and sacraments.
On prayer: God listens to the prayers of a Godly man. If you want your prayers to be effective, live a righteous life.
On fellowship/community: Community shines the brightest when we are at our darkest. Therefore, when you are facing the most difficult trials, do not leave community.
Sometimes, our Goliaths are too strong for us but God gives us weapons that are strong enough to conquer our Goliaths.

3. Choose to ENTRUST.
You take good care of something you own. That is human nature. Now the question is, who owns your life? If you say it's the Lord, then you have nothing to worry. Because whomever the Lord owns, He takes care of. The battle is no longer yours, it's the Lord's.

4. Choose to ENGAGE.
Bring the battle to the enemy. Be brave enough not to turn your back on this fight. If you believe that God will meet you where you are, then be ready to meet the enemy where he is.

Bobby ended his talk with this: God will not spare us from the storm, but be assured that in the midst of the storm, He will hold us in the palm of His hands and He will never let go.

The event was about to end as Bobby led everyone to community prayer. But Fr. Dave Concepcion had something more to share. He got up the stage and exhorted: We are not the light. We are just bearers of the light. And in order to be bearers, we must be willing to catch the fire. We must be ready to burn, to be hurt, to be consumed. Those who choose to fight, the Lord assures you of His might. Do not focus on your weaknesses but on the love of God that is ever-faithful.

Ultimately, the event was all about one thing: God's love that is all-embracing. In one word, catholic. :)

Popular posts from this blog

April 07, 2015
I had the best, most meaningful HOLY WEEK ever, so far (the best is yet to come!). :) Thanks to Joy who shared the Jesus Week poster on Facebook. It was God's personal invitation, and I couldn't thank Him enough for the grace that He also gave me to respond. Everything is grace. It was not just my personal decision to join. It was God's grace that allowed me to.  So how did it go? Well, as what I have told my friends, it was amazingly beautiful! The experience was priceless! On Holy Monday, I posted Fr. Jerry Orbos' acronym for HOLY WEEK . I experienced all of that and more! :)  I won't be able to share everything as there is just a lot of personal, intimate encounters with the Lord. But if I were to summarize, it was a time for me to HEAL. :)  H alt . Indeed, I was able to stop and just rest in the Lord. Before leaving Manila, I have already told myself that this retreat will be all about Jesus ( Jesus Week nga e :D ). No emails, no texts, no calls. I
Post a Comment
Read more

November 27, 2013
Every Filipino knows Lupang Hinirang (though some know it better as " Bayang Magiliw "). How can you not know it when it is the national anthem of the Philippines? But do we really mean the lyrics that we sing? Do we understand it in the first place?  Photo Credit:  http://diazi.ism-online.org This video has gone viral weeks ago. This afternoon, I shared it to my teammates, and one commented, "Yun pala yun . Ngayon ko lang naintindihan."   He immediately downloaded it and converted to MP3.   So for those who have not seen it, once again, here is Joey Ayala's version of Lupang Hinirang. And I agree, you would never want to sing it in another way. (But that's just me. :D) This rendition is simply beautiful. Truly Filipino. :) Of course that doesn't mean we need to revise our national anthem but maybe we can consider about correcting the way we sing it (read: proper pronunciation). Read more about the Philippine National Anthem here .
Post a Comment
Read more

May 07, 2013
*Cluster 4 Household Topic Reflections from John 15:26-16:4 True friendship is strengthened in adversity. Jesus offers His disciples the best and truest of friends. Who is this promised friend?  Jesus calls the Holy Spirit our Counselor and Advocate (also translated Paraclete or Helper). Counselor is a legal term for the one who will defend someone against an adversary and who guides that person during the ordeal of trial. The Holy Spirit is our Advocate and Helper who brings us safely through the challenges and adversities we must face in this life. As Jesus approaches the hour that He was to be glorified - through His death on the cross and His resurrection - He revealed more fully to His disciples the person and the role of the Holy Spirit. What does Jesus tell us about the Holy Spirit?  First, the Holy Spirit is inseparably one with the Father and the Son. It is the Holy Spirit who gives life - the very life of God - and who kindles faith in hearts receptive
Post a Comment
Read more

January 18, 2014
I was writing a different post, but Celebrity Bluff  is just so fun and informative, I had to stop from blogging to list down the fun facts that I learn from each round. :)  Thought it would be nice to share them here as well. For future reference. :D  Q: In 2012, what kind of animal was named after Beyonce? A: Horse Fly Q: What rare job in China will pay you US$50,000 a year?  A: Fart Smeller Q: What alcoholic drink literally means "water of life"? A: Whisky   Q: In which part of the body can you find the tragus? A: Ear Q: According to Merriam-Webster, what is the female equivalent of dude? A: Dudine Q: What is longer in the male turtles than in the females?  A: Nails And the final question is... Q:  According to Box Office Mojo   what are the top four (4) movies of 2013 according to global profit? A: (1) Iron Man 3, (2) Despicable Me 2, (3) Fast and the Furious 6 (4) The Hunger Games: Catching Fire That's all
Post a Comment
Read more

Aiza Garnica Santos
Child of God and lover of life. ♥